Nativity of St John the Baptist 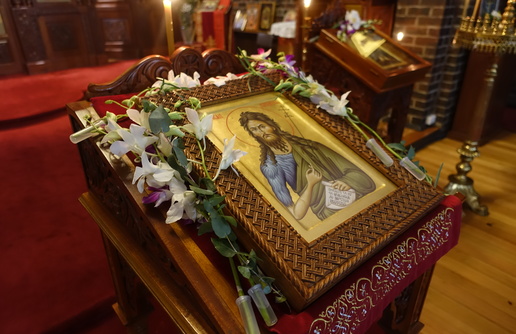 Today we celebrate the Nativity of St John the Baptist. The Liturgy of Catechumens was broadcast on our YouTube channel; a number of parishioners managed to attend.

Merry Slava to all who celebrate their family Patron!

THE NATIVITY OF SAINT JOHN THE FORERUNNER

AND BAPTIST OF THE LORD

Zacharias did not immediately believe the words of the herald of God, and thus his tongue was bound by dumbness and it remained thus until eight days after the birth of John. On that day the relatives of Zacharias and Elizabeth gathered for the young child’s circumcision and naming. When they asked the father what name he wished to give to his son, since he was mute he wrote on a tablet: “John.” At that moment his tongue became loosed and he began to speak.

The home of Zacharias was on the heights between Bethlehem and Hebron. The news of the appearance of the angel of God to Zacharias was spread throughout all of Israel, as well as that of his dumbness and the loosing of his tongue at the moment when he wrote the name “John.”

The news concerning this even reached Herod. Therefore, when Herod sent soldiers to slay the children in Bethlehem, he directed men to the hills, to the dwelling place of the family of Zacharias, to kill John also. But Elizabeth promptly hid the child. Enraged at this, King Herod sent his executioners to Zacharias in the Temple to slay him (for it happened that it was again Zacharias' turn to serve in the Temple of Jerusalem).

Zacharias was slain between the court and the temple and his blood coagulated and petrified on the paving stones and remained a perpetual witness against Herod. Elizabeth hid with the child in a cave, where she died soon after. The young child John remained alone in the wilderness under the care of God and His angels.

You can watch the service here: